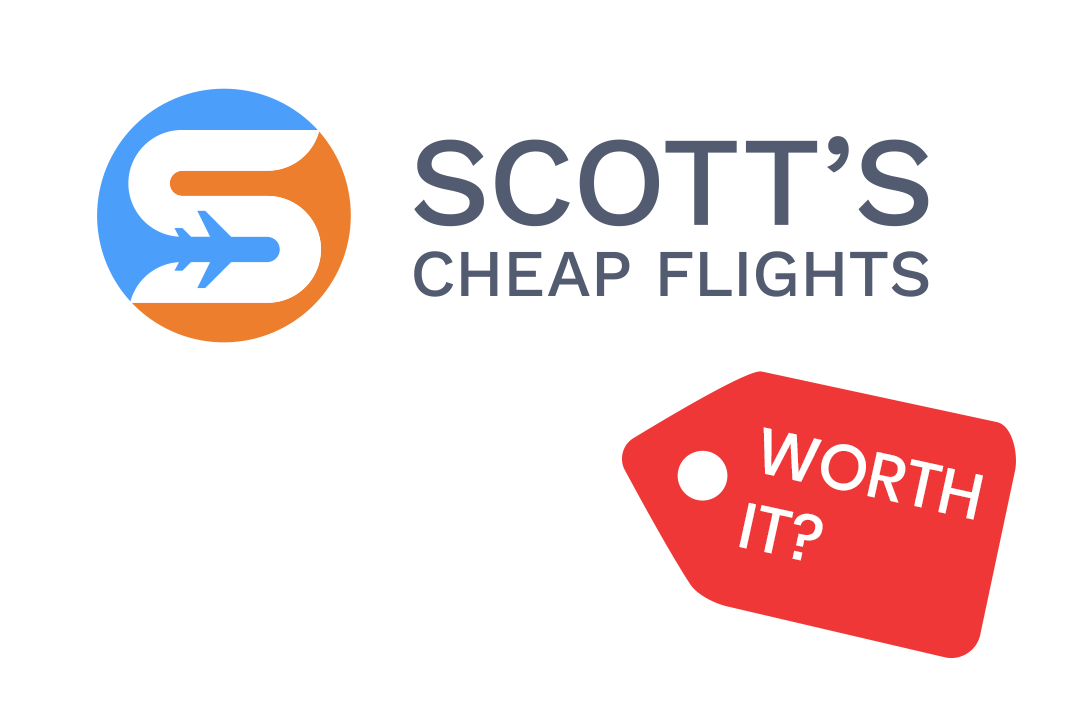 A Comprehensive Review of Scott’s Cheap Flights: Free vs Premium, Is Premium Worth It?

February 18, 2020
There’s a lot of talk about Scott’s Cheap Flights and the grand discounts they claim to offer for its subscribers, which is why we thought it deserves a review. We want to help our readers find out if it’s actually worth the price by digging into every minute detail that matters in our extensive review by making a comparison between its free and premium memberships. We also focus on its downsides that are often overlooked in many other reviews on Scott’s Cheap Flights.

You might have a place set in your heart to travel abroad for the next holiday - somewhere romantic, somewhere serene, or somewhere adventurous. But sometimes, expensive airfares might be what’s stopping you. So, the idea of getting an insanely cheap flight deal for a trip abroad is good enough to send anyone over the moon.

But, searching for flight deals is easier said than done. Imagine going through so many websites in search of discounted airfares until you come across a few good ones, and by the time you decide to book it, you no longer find it available. Well, that’s exasperating!

How do you like the idea of massive, crazy, eye-popping deals swooping into your email, and you getting to score them from the comfort of your own house or anywhere you are in?

Well, that’s what Scott’s Cheap Flights is all about. It’s a web service that rounds up the best airfare deals right when they are posted and send them to you via an email newsletter. The specialty is that it’s doesn’t send any and every flight deal that’s posted by airlines or agencies.

Scott and his team make sure that they carefully pick insanely cheap deals too good to let go while making sure they fit into a criteria of other factors. At least, that’s what they claim and brag about, and it's time for us to find out the truth!

So, we thought of doing a detailed review of Scott’s Cheap Flights to put things in perspective and see if it is really worth it. It’s a must-read for anyone who is considering the option of creating an account. Is it good as people claim it to be? Is the premium option worth the money? Is a cheap trip to your dream getaway really near your fingertips?

Read our Scott’s Cheap Flights Review to find out!

Here is a brief introduction to the service before we dive into a fully detailed review. Scott Keyes, an enthusiastic traveler turned his crazy obsession to hunt for cheap flight deals into a monetizing service that brings prompt alerts of massively discounted flight deals to those who are interested, right when they are announced online.

At present, millions of people have subscribed to Scott’s website for travel deals which means that it has proven itself as a worthy choice. But, that doesn’t mean it’s the only option available out there as there are so many other alternatives that you can consider like Flyhoop.com.

This Scott’s Cheap Flights Review is of little use to people living outside the U.S because the deals that they send are exclusively focused on routes from America to international destinations. Moreover, it doesn’t give you alerts on domestic flight deals so if that’s what you were looking for, this is not it.

‍Review of Scott’s Cheap Flights' Free Limited Membership: What You Get & What You Don’t

Anyone can sign up on Scott’s Cheap Flights for free and enjoy their service with certain limitations. The free version is a good place to start and see if you find it useful. What we can recommend you in our Scott’s Cheap Flights review is to use it as a benchmark to decide if you should go for the premium membership.

What Does the Limited Free Membership Include?

The premium membership of Scott’s Cheap Flights costs you $49 per year which is not much according to our opinion. It does bring a host of added benefits in comparison to the free membership. But, there are other cost-effective options available to you. So, in order to know if subscribing for the premium version is really worth the dollars you invest in it, keep reading our review of Scott’s Cheap Flights to find out!

What the Premium Version Exclusively Offers You

Obviously, Scott’s Cheap Flights favors paid membership over the free ones in giving them better deals more regularly and consistently. Compared to the limited membership, you have an array of choices here to go through and pick one that’s most appealing. Therefore, all in all, we find the pricing to be reasonable given the number of services you get. However, it’s more ideal for people who travel often or at least considerably to exploit the maximum benefit from the premium version.

How to Use Scott’s Cheap Flights to Book Deals‍

First, you have to visit their website and create an account. Once you sign up for free, you can add your “home airport” and check if there are a lot of deals coming from it usually. Otherwise, the website will recommend to you other nearby airports to bring in more deals.

If you have signed up for a paid version, you can easily make your payment through your debit or credit card. Whether you are a free or premium member, you have the option of personalizing your account based on your preferred regions. If you want to unsubscribe, you just have to send them an email and within 24-48 hours, they will sort it out for you.

How to Find and Book the Exact Deal Mentioned in the Email?

It’s pretty simple because all the details are given to you. As an example, if you want to make use of an interesting deal that gives you a trip to France from the U.S at a very discounted price, check the details provided first. Enter the exact words provided in the search engine or on the particular website they have mentioned.

While some deals may require a coupon code, others from agency websites may not. There may be certain deals which can be procured if you make the payment via a credit card. All these details will be outlined in the description. Once you have figured these out, go ahead and confirm the booking. But, remember that the best deals don’t last long, so you have to do it as fast as you can!

The idea of a great deal as Scott’s Cheap Flights brags is not something that merely guarantees you an extravagantly low airfare to a specific destination but also one without inconvenient routes that make you regret the decision to opt for a dirt-cheap deal. While that’s what Scott and the team guarantee you, we found that this may not be the case all the time.

According to some Reddit users on their Scott’s Cheap Flights review, some flight deals for certain destinations can have many stops along the route with long layovers. This can be very exhausting sometimes, and therefore let us not gloss over the fact that good deals don’t necessarily guarantee you a good flight journey. In our Scott’s Cheap Flights review, we would like to highlight that unless you are a travel-savvy person who knows how to navigate your way through arduous journeys, these layovers can be frustrating.

On the bright side, we also saw many positive reviews as well from those who have benefited from the interesting deals posted by Scott’s Cheap Flights. So, all in all, it’s for yours to pick and choose the deal after doing good research on it.

We think that the quality of deals sent by Scott’s Cheap Flights is great because they mainly focus on the actual worth of a good deal. They don’t function based on referrals or paid advertisements, which means that they don’t receive any commission when you book a flight based on their recommendation.

When we compare the number of deals that users receive with the annual membership fee, it’s a good gain for the subscriber. According to Scott’s Cheap Flights, their members save $550 on average and have the potential to make use of discounts that go up to 90%. While some of the deals they provide are promotions done by airlines and agencies, many are mistake airfares. So, you get to exploit the crazy mistakes that airlines tend to commit sometimes!

Even though there are few setbacks, Scott’s Cheap Flights promises you super cheap flight deals. According to many people who have been using it for some time, you get to save a lot, especially if you travel abroad very often. The best thing is that it saves you from all the trouble of looking for low air tickets because Scott’s Cheap Flights does all the hard work when it comes to mining amazing deals online, and sending them to you right after they appear online. They will also give you an estimate on how long they think the deal will last, which is pretty amazing.

While Scott’s Cheap Flights promises you great flight deals, it’s not the only option you have when it comes to a reliable website that helps you make use of discounted airfares. Flyhoop is one of the great alternatives that you should definitely consider as it rounds up deals from multiple sources. It stands out from Scott’s Cheap Flights and every other website in many other ways.

You can check out this comparison made between Flyhoop and Scott’s Cheap Flights to understand how Flyhoop stands out in a gist. If you want to know more in detail, keep reading to find out!

Free membership allows you to browse and look for deals that are most suited for your requirements, and this is something that’s not granted for free members of Scott’s Cheap Flights. Also, if you are a member, you will be privileged with bonus benefits like the ability to save the deals to review later and filter flight deals by 1st and business class!

Receiving daily alerts on flight deals through email is both a good and a bad thing because not everyone checks their inbox every other hour. Unlike Scott’s Cheap Flights, Flyhoop not only notifies you of the best flight deals via email but real-time alerts to your phone which is so much easier and convenient than having to check emails very often! There’s no way you will miss out on a deal again.

While you may already be convinced of making the switch to Flyhoop by now, wait to hear the best part. The membership on Flyhoop only costs $36 per year which is impressive pricing compared to Scott’s Cheap Flights. With more benefits than Scott’s Cheap Flights and a lower membership fee per year, Flyhoop seems to have scored more points by catering to a budget traveler’s needs perfectly.

Our Final Recommendation Based on Scott’s Cheap Flights Review

We hope we did a detailed review on Scott’s Cheap International Flights focusing both on its paid and free version, to help you figure out if it is worth signing up and checking on for great deals to the destination you wish to visit. In our opinion, it’s a solid choice, but make sure you know how to save money on travel and check other alternatives like Flyhoop before making the decision to subscribe to the premium version.